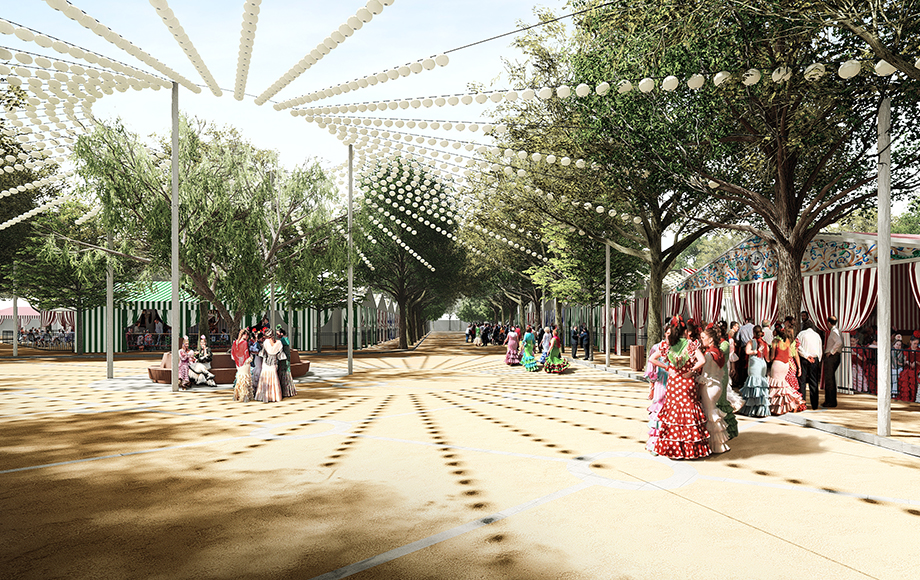 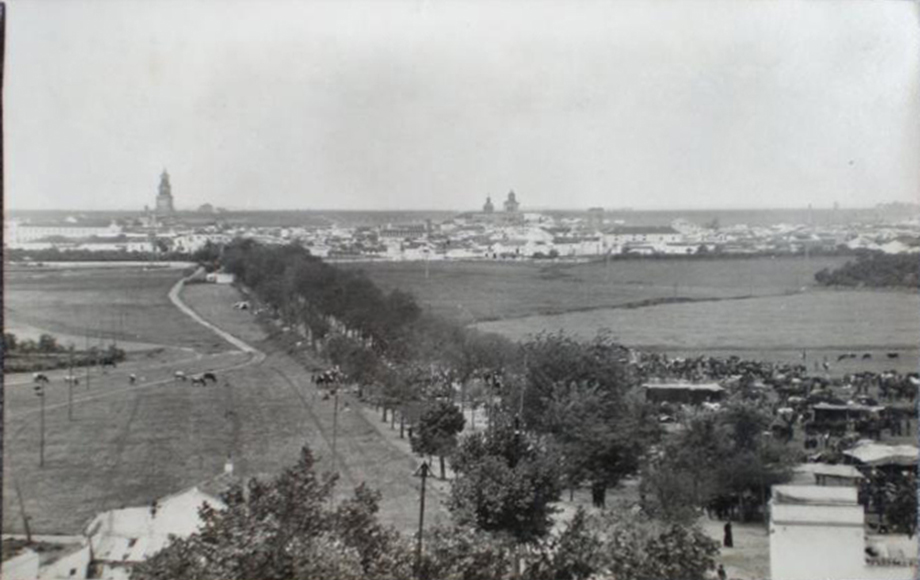 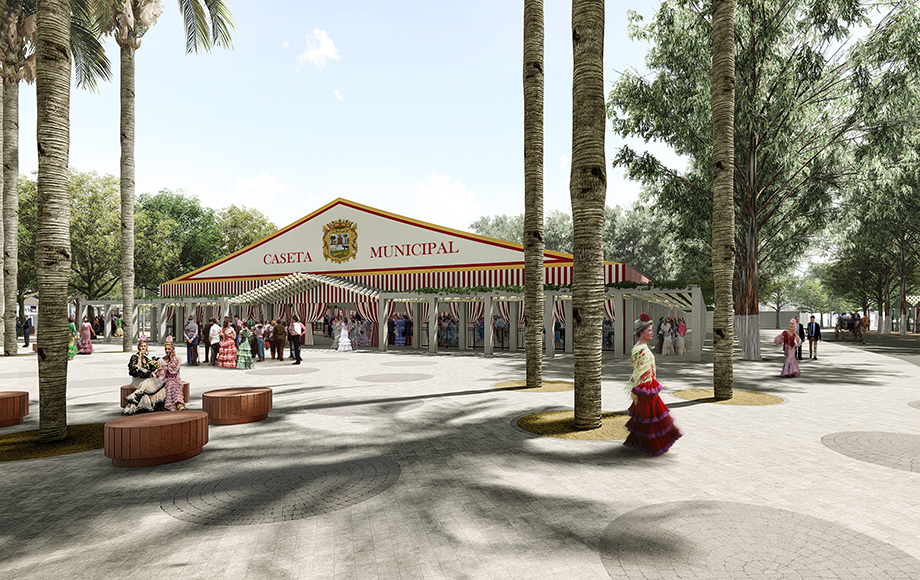 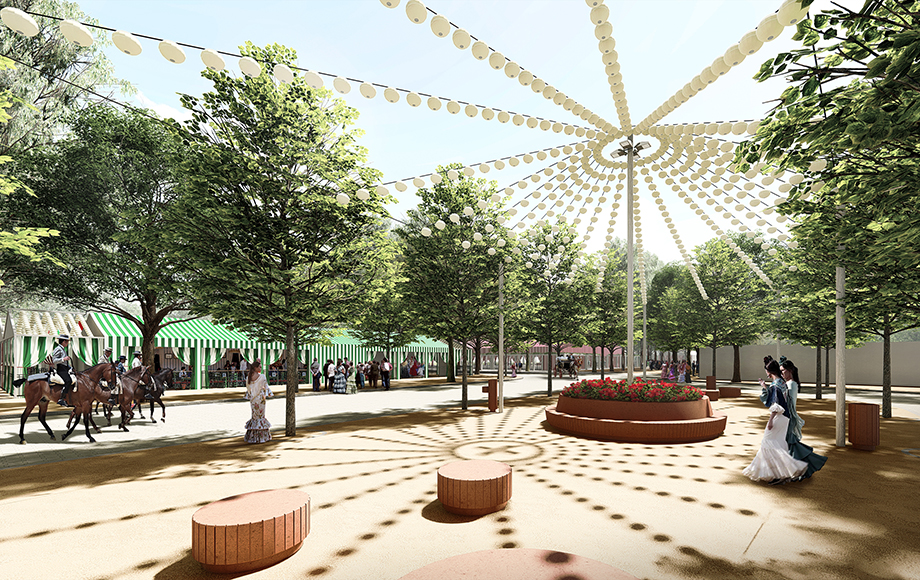 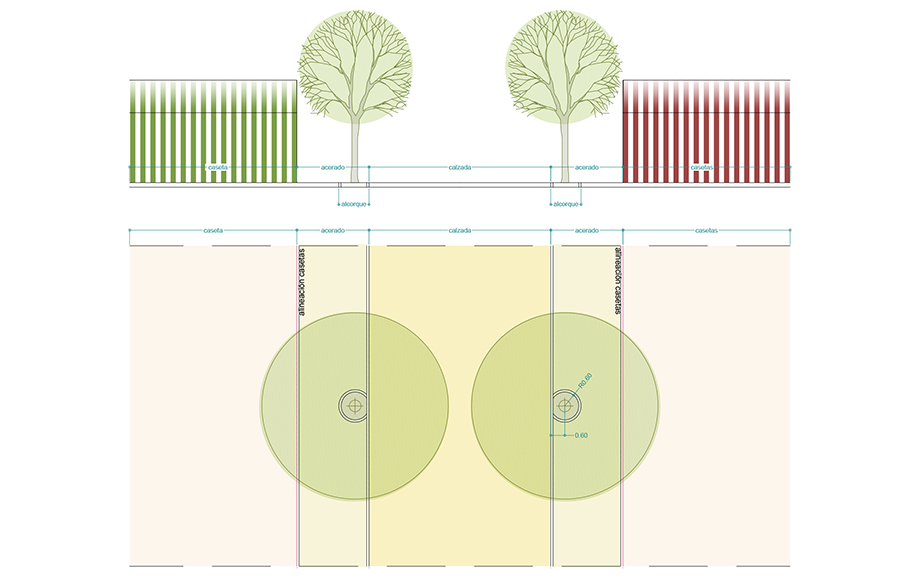 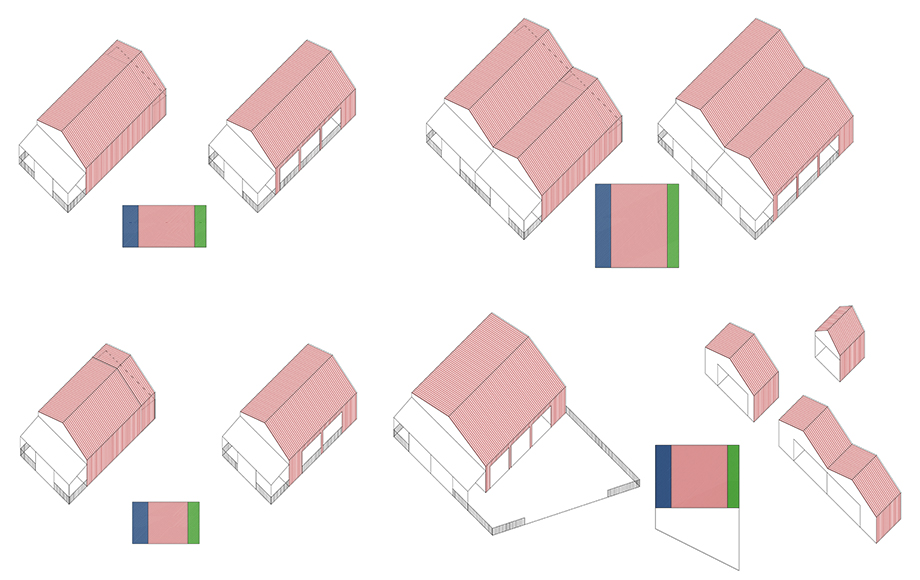 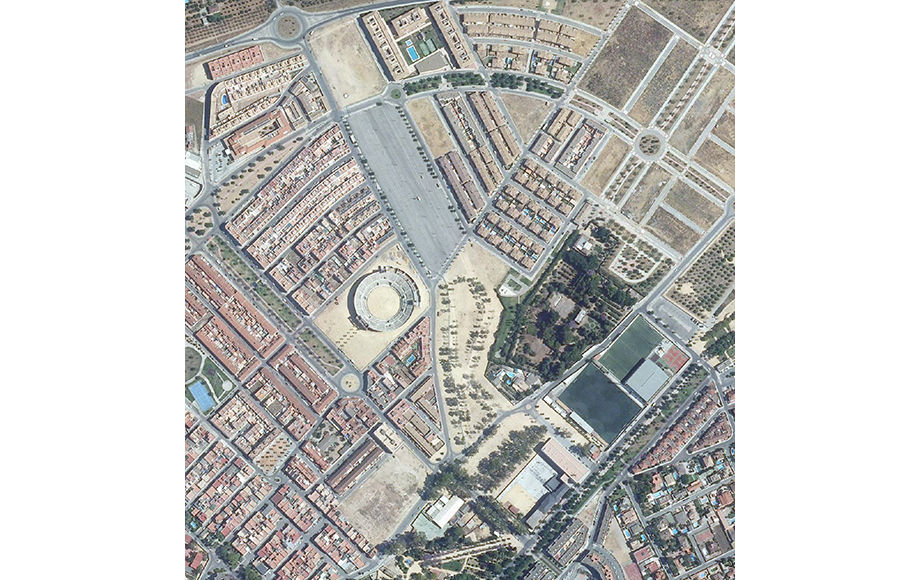 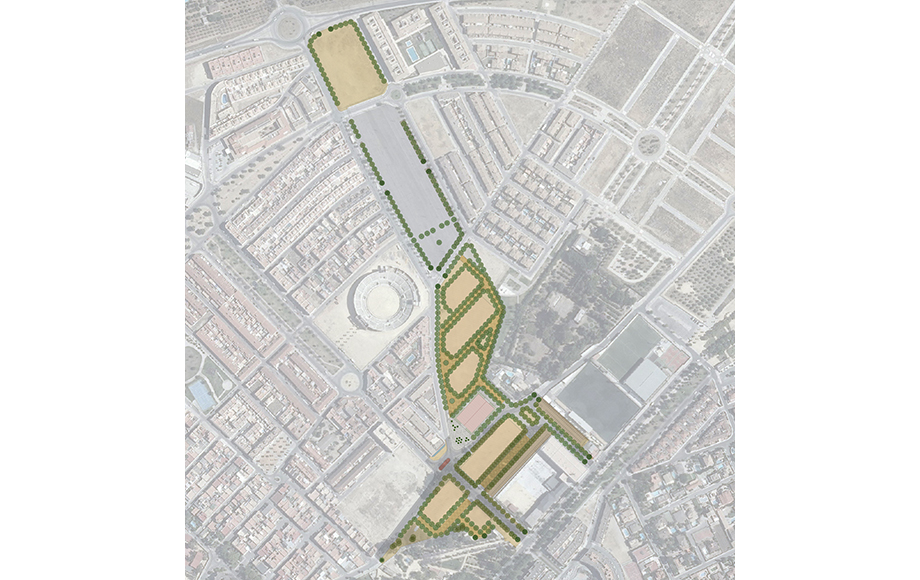 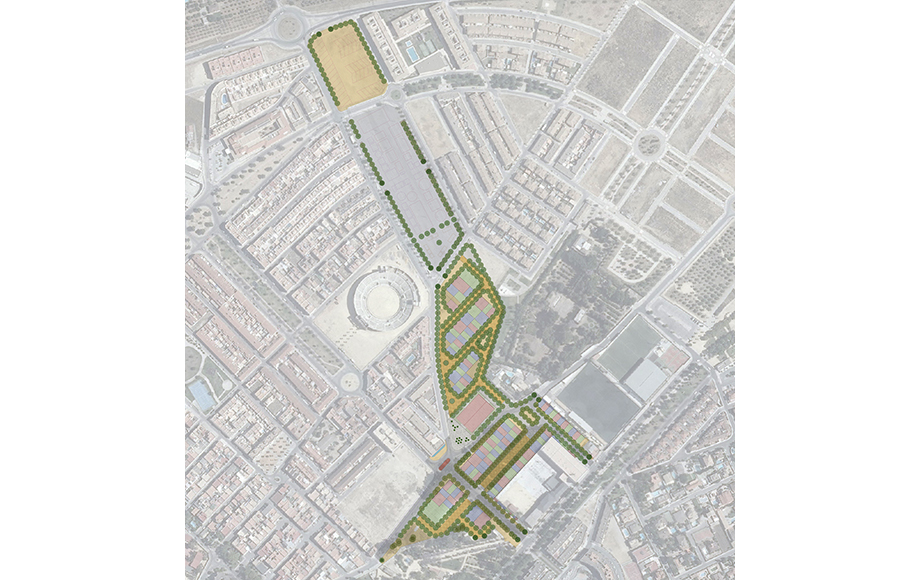 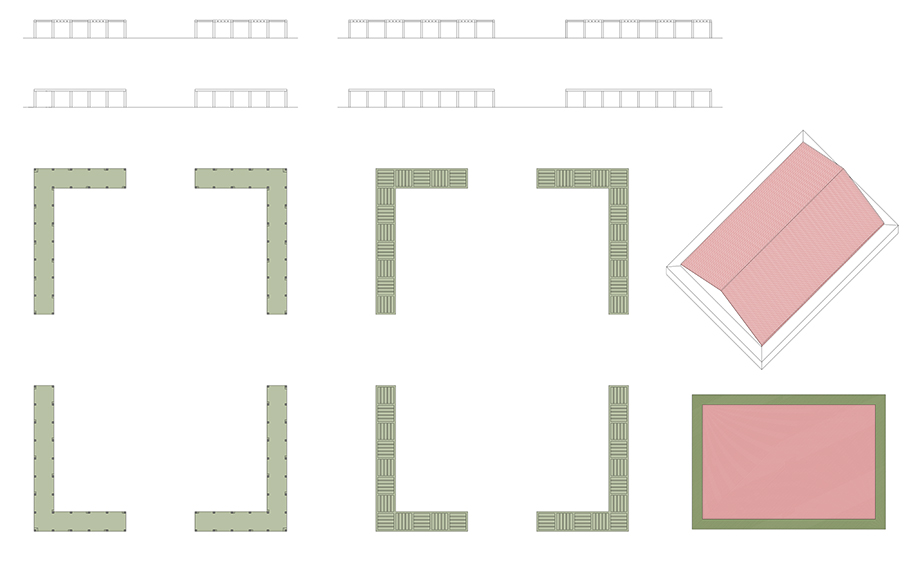 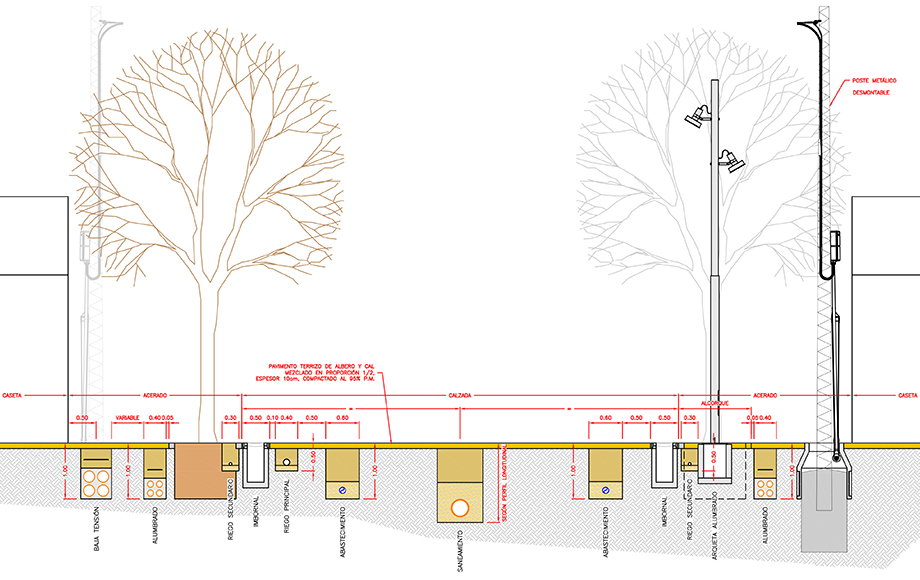 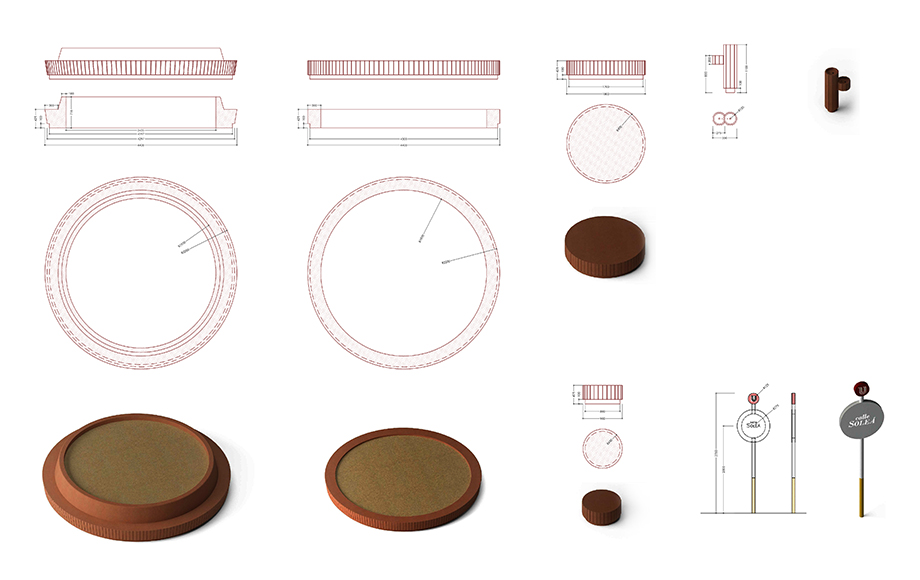 A temporary city, a permanent park.

In most of Andalusia, fairs revolve around an encampment of tent houses where ongoing partying takes place during a few days. The fun spills out onto the public space with carriage and horse rides, food stalls, trinket sales, games and rides. These activities, along with a marked atmosphere and aesthetic, as well as a sophisticated coordination between public and private agents, create a merry and bustling temporary city.

To achieve this, the fairgrounds must be laid out in such a way and have the adequate scale to accommodate this festive domesticity, posses the environmental conditions to enable the enjoyment of public space, and include the necessary infrastructure to make everything work during this concentrated and intense use. In Utrera, the grounds are associated with the historical setting of this celebration, the environs of to the sanctuary of Consolación (the raison d’être of the fair) both of which used to be on the rural outskirts of town. Nowadays, the city having engulfed the grounds, the area must also serve as an everyday public space.

The proposal is approached as an exercise in city pattern design and its connection to the urban tissues and facilities that surround the grounds, solving existing border, transition and continuity issues between the different areas and generating new centralities. In this way, the directionality of the Paseo de Consolación  and the layout of the older part of the grounds are used as references to delineate the new blocks and streets, therefore highlighting the importance of the layout of the historic lane that connects the town with the sanctuary. Back-space conditions are eliminated in order to create continuity between the existing park and the grounds, and the municipal tent house is moved and placed at the heart of the grounds to serve as a year-round public facility. These actions, along with the planting of dense alignments of trees marking the blocks and the streets make the grounds become a park with tree lined avenues and fields of opportunity for its everyday enjoyment.

Reorganization and infrastructure renewal of the Utrera Fairgrounds .